Abortion Grows as a Motivator for Midterm Voters, Particularly for Democrats and in States Where It Has Become Illegal Since the Supreme Court Overturned Roe v.

Few Voters Know About the Medicare Drug Provisions in the Inflation Reduction Act, Though Seniors are More Aware and Would Be Likely to Vote for Candidates Who Support Them

About a month ahead of the 2022 midterm election, abortion continues to grow as a motivating issue for voters, especially among Democrats and those living in states where abortion is now illegal, the latest KFF Health Tracking Poll finds.

Half (50%) of voters now say the Supreme Court’s decision overturning Roe v. Wade has made them more motivated to vote in this year’s elections, up from 43% in July shortly after the Court’s decision and from 37% in a similar question in May, prior to the decision. About two thirds of Democrats (69%), and half of independents (49%), cite the Court’s decision as a motivator, as do a third of Republicans (32%).

Many races in the midterms will be decided by marginal changes in turnout, with a few voters making a difference. The new survey reveals how abortion access and reproductive health is motivating majorities of Democratic women, women of reproductive age, and Democratic and Democratic-leaning voters in states where abortion is currently illegal.

With states now determining whether and when abortion is legal for their residents, four in ten (40%) voters say their state’s abortion laws are making them more motivated to vote this year.

In states with abortion bans in place following the Supreme Court’s decision, half (51%) of voters say their state’s abortion laws are making them more motivated to vote this year. This includes three quarters of Democratic and Democratic-leaning voters (74%) and a third of Republican and Republican-leaning voters (35%) in those states.

Nationally, 82% of voters oppose laws that would prohibit abortion in cases of rape and incest, as is now in place in some states such as Texas, Tennessee, South Dakota, Missouri, Louisiana and Kentucky. About six in ten (59%) oppose prohibiting abortions after a fetal heartbeat is detected, which is usually at around six weeks.

In addition, large majorities of voters oppose punitive abortion laws, such making it a crime for doctors to perform them (74%) or for women to get them (79%), and allowing private citizens to sue people who provide or assist in abortions (81%).

Most voters living in states with abortion bans oppose each of these restrictions, often by large margins. 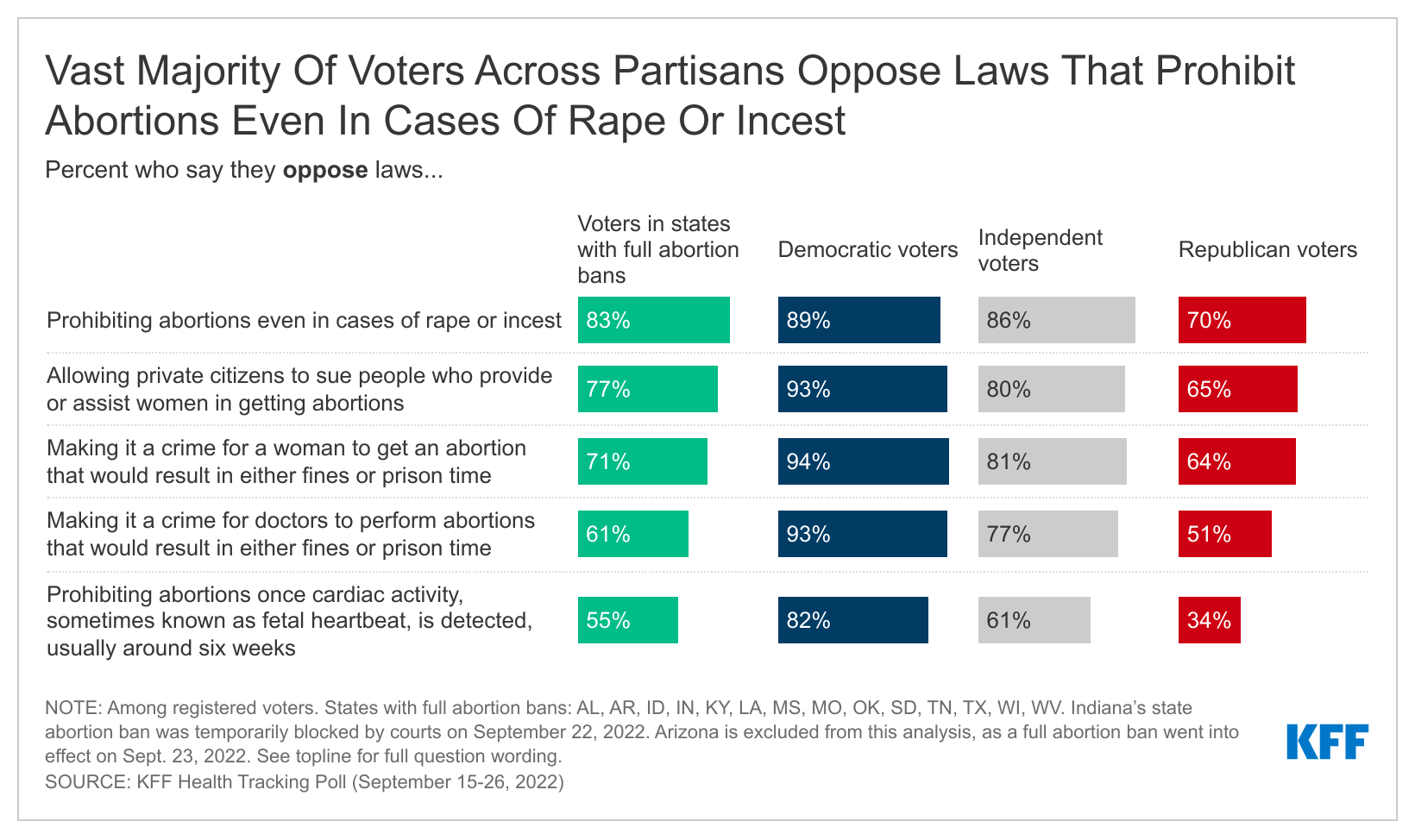 “With a Democrat in the White House, Republicans start with an advantage in this year’s midterm, especially on issues such as gas prices and crime, but their efforts to ban and criminalize abortion are backfiring on them politically, even in red states,” KFF President and CEO Drew Altman said. “Whether this motivates enough voters to hit the polls and change the outcome remains to be seen.”

Awareness of IRA’s Medicare Provisions is Low, Though Most Older Voters Like Them

The survey also probes the public’s knowledge and views about the Inflation Reduction Act (IRA), which President Biden signed into law in August. The law includes provisions related to health care and drug prices, as well as climate change and tax policy.

The provisions are popular, with majorities of voters supporting some of the new law’s Medicare provisions, suggesting that Democrats can campaign on them with positive results.

Older adults at least 65 years old, who are most directly affected by Medicare changes, are twice as likely as younger adults to say they’ve heard “a lot” about the IRA (25% vs. 12%). They are also more likely than younger adults to know about the Medicare drug negotiations and insulin provisions.

In addition, large majorities of older voters say they would be more likely to vote for candidates who support each of the IRA’s Medicare drug provisions, including limiting out-of-pocket prescription costs (73%), allowing Medicare drug price negotiations (65%), and capping monthly insulin costs (64%).

Designed and analyzed by public opinion researchers at KFF, the survey was conducted from Sept 15-26, 2022, online and by telephone among a nationally representative sample of 1,534 U.S. adults, in English and in Spanish. The survey included an oversample of 599 women between the ages of 18 and 49. The margin of sampling error is plus or minus 3 percentage points for the full sample. For results based on other subgroups, the margin of sampling error may be higher.

Resilience training is not dead, but it is coughing up blood – SafetyAtWorkBlog